Force Opens Latest Recruitment Drive with a Focus on Family, the County and Diversity 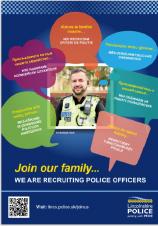 Lincolnshire police is launching its latest recruitment campaign today with a new appeal to people from the east of the county, people with second language skills and people from BAME communities to join the force.

A new DC (Detective Constable) Fast Track scheme is also being launched that will help successful applicants with a desire to be detectives develop key skills for these roles in a more condensed fashion than before.

A Facebook Live Q&A session will also be held at 7pm on the 12 October where prospective recruits can ask questions of a panel of officers.

Throughout the eight-week campaign the force will be releasing a series of promotional videos on social media to showcase the diverse range of people and skills that work for the organisation, as well as holding a series of community events and online Q&A sessions for potential recruits to find out more about the force.

DI Lee St Quinton of Lincolnshire Police's Horizons 2023 Programme said: "As part of the national uplift which will see 20,000 extra police officers on our streets, we are really pleased to be able to continue with our recruitment of new officers into the force. The recruitment window which opens today will see targeted efforts in recruiting from minority groups that make up our diverse communities. We would particularly like to hear from candidates who are able to speak a second language, those willing to work on the east of the county and those applicants who come from black, Asian and minority ethnic backgrounds.

"Policing in Lincolnshire is extremely rewarding with a number of opportunities to specialise throughout your career: Our new Detective Fast Track scheme is a great opportunity for those applicants who can think differently and have a particular attention to detail.

"Policing is made up of people from all walks of life, the videos that we will be releasing throughout the campaign will hopefully help potential officers realise the diversity within our organisation, challenging many stereotypes along the way. We are committed to developing a skilled workforce that is not only fit for purpose, but one that is truly representative the different communities that we serve."

The videos that the force is releasing will tell the stories of several working officers, all from different backgrounds and with different histories:

A video detailing the DC Fast-track scheme will also be released during the campaign. Rachel Betts, Head of HR for Lincolnshire police added: "There will be a lot of people in Lincolnshire with skills they have gained in their current or previous jobs that would make them excellent candidates, who may not have previously considered a career within the police service.

"In addition to our usual recruitment for officers who will work in response policing, we now have a new DC Fast Track scheme where there is the opportunity to put these skills into practice in an investigative capacity.

"The diverse nature of our Crime departments means that people with experience in sectors like finance and social care - to name just two - would bring with them skills that are transferable to the role of a detective. So, if you have never previously considered a career with the police, but this campaign catches your eye, please get in touch."

People interested in finding out more on a career with the police should initially visit: https://www.lincs.police.uk/about-us/join-us

JOB VACANCIES - Cafe Supervisor - Community Café Supervisor (hours to suit opening times) Starting at £9.46 per hour Hours to be agreed. (With potential for a permanent position and more hours for the right candidate) To start as soon as possible. Ar… bit.ly/3xyWK2C