Friday 10th September – Attended the Magna Vitae EBF bowling tournament at the Suncastle where he helped to present the awards.

Saturday 11th September – Attended the Scooter Rally at the Suncastle.

Friday 17th September – Visited the Playa Bar on Skegness Pier where they were holding a Reggae event. 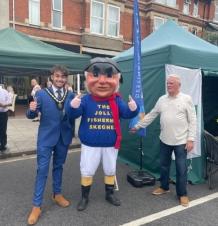 Thursday 30th September – attended a presentation by the High Sherriff of Lincolnshire to give a local man an award for his community service.

RT @samaritans: Grief is very individual and there’s no right or wrong way to feel.

Some people find it helpful to talk to us about grief, we’re neutral, non-judgmental and here 24/7 💚

RT @BCEReviews: ⏰Don't miss your final chance to help the Boundary Commission for England reshape the current constituency map and rebalance elector numbers. Our final consultation ends at midnight tonight - view the revised proposals now and have your say at bcereviews.org.uk.