Saturday 5th May 2018 – Attended the Skegness Scooter Rally held at the Suncastle and officially started the ride out.

Friday 11th May 2018 – Was invited to attend the opening of the new night club Kush in Skegness.

During his time as Mayor, Councillor Danny Brookes had been raising money for his two chosen charities, Alzheimer's Research UK and R.N.L.I. During the Annual Meeting of the Council, Cllr Brookes presented representatives from the two chosen charities with a cheque for £1,695.65. 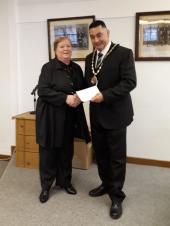 Cllr Danny Brookes presenting a representative from Alzheimer's Research UK with a donation of £1,695.65 from the Mayors Charity Fund 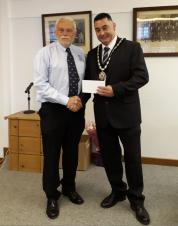 Cllr Danny Brookes presenting a representative from RNLI with a donation of £1,695.65 from the Mayors Charity Fund