Monday 6th August 2018 – Was present at Gibraltar Point to welcome Skegness resident Claire Draper who had just swum the Wash to raise money for a charity.

Wednesday 8th August 2018 – Did a live broadcast from the RNLI station for BBC Coventry and Warwickshire.

Wednesday 8th August 2018 – Did a live Broadcast from the RNLI station for BBC Radio Leicester.

Sunday 12th August 2018 – Judged the floats taking part in the Carnival Parade and then took part in the parade. 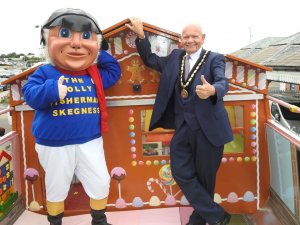 Sunday 12th August 2018 – attended the cheque presentation at the Welcome Pub for the money raised in aid of Macmillan during the Skegness Mini Fest.

Tuesday 14th August 2018 – Was present at the Skegness Carnival Baby show in the Tower Gardens where the Mayoress, Mrs Marie Dennis judged the competition.

Friday 17th August 2018 – Handed out trophies to the winners of the Skegness Carnival Pet Show held in Tower Gardens.

Saturday 18th August 2018 – Delivered the first bowl and made a speech to open the English Bowling Federation tournament on the North Greens near the Suncastle.

Thursday 23rd August 2018 – The Deputy Mayor, Councillor Maggie Gray watched the Janice Sutton Performance of "Oh What a Night" at The Embassy. The Mayor attended the pre – show event in the Foyer.

Sunday 26th August 2018 – Was present at the second day of the Phillip Grove charity arts and crafts event.

Monday 27th August 2018 – Unveiled a defibrillator at the train station which had been organised by the Rotary Club of Skegness. Looked at a set of 6 murals designed by children from 6 local schools. 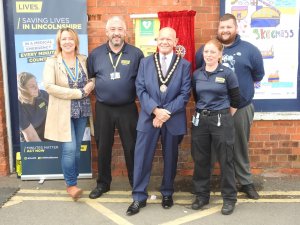