May 2017 - Annual Meeting of the Council 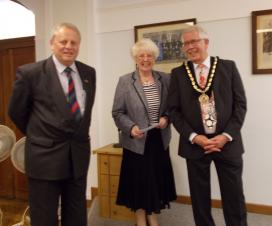 Major Nick Bodian on behalf of the Army Benevolent Fund and Mrs Bessie Smith on behalf of the League of Friends of Skegness Hospital receiving their donations from Town Mayor Cllr Dick Edginton.

During his time as Mayor, Councillor Dick Edginton had been raising money for his two chosen charities, The Army Benevolent Fund and The League of Friends of Skegness Hospital. The presentation took place during the Annual Meeting of the Council where representatives from the chosen charities both received a cheque for £1,640.00. 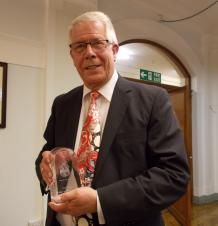 During the Annual Meeting of the Council, Councillor Dick Edginton retired as the Town Mayor. During his Mayoral year, he has attended over one hundred engagements. As a token of gratitude, he was presented with a crystal award commemorating his year as Mayor. 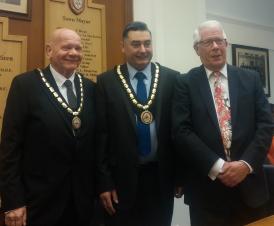