It has been said with some truth that Skegness rose to fame on a poster.

The Jolly Fisherman Poster and its accompanying slogan is probably the most famous holiday advertisement ever drawn.

It has been circulated hundreds of times in almost every newspaper in the land, and the dancing salt has been imitated by thousands of visitors.

John Hassall drew the picture in 1908. It had been commissioned by the Great Northern Railway Company and for this masterpiece he received twelve guineas. 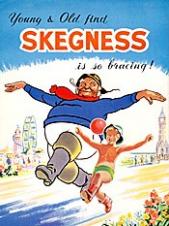 The "so bracing" slogan, of almost equal importance, is believed to have been the brainchild of an unknown member of the Railway Staff.

The poster was first put on display at Easter time that same year in conjunction with a special three-shilling excursion from Kings Cross. The last of these trips ran on August Bank Holiday, 1913.

Hassall, one of the greatest of all poster artists, drew many telling advertisements, but none so fine as the Jolly Fisherman. He visited Skegness only once in his life. That was in 1936 when the town which he had put on the map presented him with an illuminated address and "the freedom of the foreshore"

John Hassall said, "the reality of Skegness has eclipsed all my anticipation's. It is even more bracing and attractive than I had been led to expect".

Hassall's original masterpiece was formally given to the town by British Railways, along with the copyright in 1966 and is currently owned by Skegness Town Council.

Recently the BBC produced a programme that features the artwork.

In 2020 Skegness Town Council received a Heritage Lottery Fund Grant to restore the two Jolly Fisherman paintings. The paintings are now on permanent display with Tower Gardens Pavilion for all to enjoy.

Skegness Neighbourhood Plan - The most important part is you!

We need your thoughts, opinions and support. Have your say by completing our form online or available from the Tower Gardens Pavilion.

RT @LincolnshireEP: The government's COVID-19 Response: Autumn and Winter Plan has been announced.